Today, I'm happy to share my interview with Australian spec-fiction author Donna Maree Hanson. I found Shatterwing when I was new to Netgalley. The book had the word "dragon" on the cover so I clicked. I was taken by this dark and original fantasy and have enjoyed her work ever since.

Recently I had the opportunity to ask her anything so I decided to challenge her on a broad range of topics!


History question: Tell me about Shatterwing. What can you share about where the ideas for the characters came from?

Shatterwing came about through an amalgam of ideas. I had the idea of Salinda and Brill for a short story that just kept going. I couldn’t make it finish where I wanted it to. Editor friends said to write the novel. Nils came about from a writing exercise in a workshop with Trudi Canavan and I really liked him.  Garan and the Skywatchers came from another exercise about a world with a lot of moons and Shatterwing. The idea then sort of developed about what life would be like when meteors fell all the time. Then somehow, a mystery to me, it all came together into one story. The characters all started existing on the same world. Danton and the Inspector came fairly early on in the piece too, but after the others. I guess the lesson for me is never throw anything out.

Dragon question: I love dragons, all kinds. What are your favourites?

That’s a hard one. I don’t usually read dragons so I can’t answer that. I’m more exposed to dragons through film, although I have my expectations that dragons are magical and friendly and good. But I think mine are more like the ones in that movie Reign of Fire. I grew up watching Godzilla and I guess that’s my biggest influence. Big monsters smashing things.

Biography question: Which other books do you have available? Can you offer us a glimpse of anything in the works?

Apart from Rayessa and the Space Pirates and the sequel, I write paranormal romance under the pen name Dani Kristoff. They are a bit sexier than my other fiction. I have two series going there. One featuring witches in Sydney, and it’s a bit of fun. Then the darker one called The Sorcerer’s Spell, which is dark and a lot hotter set in Canberra. I’ve got some books trying to find a publisher. One young adult steampunk type thing called Ruby Heart. I’ve got another YA series in the works (drafting/revision etc) and I’ve been working on an SF romance in November. It sounds like a lot but I’ve been very unproductive this year. I had a bad bout of RSI.

Science question: How is your writing den different in the summer than in the winter?

I live in Canberra so we have hot dry summers and chilly frosty Winters. This year I’ve been a bit of a vagabond, writing upstairs and downstairs, writing with friends and with my partner. I’ve only recently moved into my office which I had made into a craft room. Now I’m doing a PhD in 2016 I need to get organised and sort everything out. I have craft stuff and millinery stuff all over the house. I will have to learn discipline. This summer though we have a new deck and my office opens onto it. I’ll be able to stretch my legs and go gaze at the mountains.

Nature question: Where can you be spotted in the wild next year? Are you attending any bookish events?

I think I have two conventions planned next year. The National Science Fiction Convention (Contact) over Easter and Romance Writers of Australia in August. I am hoping to get to the World Science Fiction Convention in Finland in 2017. Now that I’ll be doing a PhD and giving up my lucrative salary, attending events will be harder. The hardest part of studying full time is the zero dollars.

Survival question: Imagine we’ve made it through zombies, virulent flu and meteors. With the new year coming, what new skill would you resolve to learn in order to barter with others and rebuild? (Personally, I’d learn cheese making but then I’d have to find cows).

I think carpentry and design. I’m useless at both but recently with the help of YouTube I’m learning some design drawing. I’m good with a hammer so I figure I might make a good carpenter when there are no more critics alive to poke fun at my efforts. 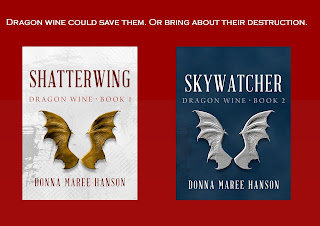 Dragon wine could save them. Or bring about their destruction.

Since the moon shattered, the once peaceful and plentiful world has become a desolate wasteland. Factions fight for ownership of the remaining resources as pieces of the broken moon rain down, bringing chaos, destruction and death.

The most precious of these resources is dragon wine – a life-giving drink made from the essence of dragons. But the making of the wine is perilous and so is undertaken by prisoners. Perhaps even more dangerous than the wine production is the Inspector, the sadistic ruler of the prison vineyard who plans to use the precious drink to rule the world.

There are only two people that stand in his way. Brill, a young royal rebel who seeks to bring about revolution, and Salinda, the prison’s best vintner and possessor of a powerful and ancient gift that she is only beginning to understand. To stop the Inspector, Salinda must learn to harness her power so that she and Brill can escape, and stop the dragon wine from falling into the wrong hands.

Dragon Wine Book 2 :Skywatcher, the follow on book is also available in ebook and print.

Donna Maree Hanson is a Canberra-based writer of fantasy, science fiction and horror. She also writes paranormal romance under a pseudonym. She has had about twenty speculative fiction short stories published in various small press and ezines since 2001. In January 2013, her first longer work, Rayessa & the Space Pirates, a young-adult, science fiction adventure romance, was published with Harlequin’s digital imprint, Escape. In 2006, she won a Varuna Long Lines Fellowship for her novel in progress, Dragon Wine, which is now to be published by Pan Macmillan’s Momentum imprint as Shatterwingand Skywatcher. Donna is also active in the science fiction fan community, having run two National Science Fiction conventions in Canberra.