Review: Songs in the Year of the Cat by H. Leighton Dickson 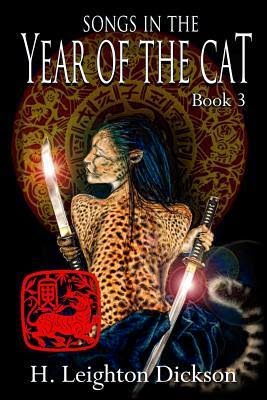 SONGS IN THE YEAR OF THE CAT is the Third in the Original Series by H. Leighton Dickson and picks up where TO WALK IN THE WAY OF LIONS leaves off. Ancestors are rising in the west and armies are moving from the North and the East.

Captain Wynegarde-Grey has only just returned to the capital of the Upper Kingdom and he is immediately pulled into the conflict as cauldrons of oil are burning all along the Great Wall and the drums of war force all soldiers back into duty.

But a mysterious woman is changing things, manipulating behind the scenes as Sherah al Shiva, ninjaah and sorceress, slips back into his life with companions that could divide the known world. This is a sweeping post-apocalyptic tale of genetically altered lions and tigers, wolves and dragons in a world that has evolved in the wake of the fall of human civilization.

Half feline, half human, their culture blends those of Dynastic China, Ancient India and Feudal Japan where humans are legend and kingdoms have risen in their stead.

Third book in the series, Songs in the Year of the Cat takes grand steps beyond the first two engaging books.
H. Leighton Dickson brings her amazing characters to life for us once again.
Each has grown and changed and although so much has happened to them, Dickson does a great job of keeping them true to their roots.

While we follow the story in the Upper and Lower Kingdoms, the chapters alternate with the telling of Kerris and Fallon's story with the ancestors. I don't know which had me more anxious.
All I could reassure myself with was the fact they made it home. Didn't help. Didn't like what happened to them. If I wasn't so darned attached to those two then Dickson wouldn't have had me in such knots.
Year of the Cat continues to weave many diverse characters, peoples and their tales together while keeping the story focused and very, very engaging.

One of my biggest regrets with this series is I can't read it again for the first time.
Few stories make me feel that way.

This volume fills us with tales of great battles, challenged relationships and reunites the characters separated in book two.
H. Leighton Dickson found new ways to break my heart and give me hope.
Inside her astonishing world, she exposes the prejudices of the cats, dogs and monkeys yet leaves the individuals in the story with the choice to overcome them or not.
Night after night as I read I cheered and cursed, such is the way of this book. In the end, I clapped and I shed a few tears.
Giving a book like this a great rating is easy, saying why is hard. Songs in the Year of the Cat gave me all the feels and pulled me along on a fantastic journey.
Sequel? I'm so glad there is a sequel and hopefully more than one. My dear cats face even bigger trouble and I really, really need to know what happens.
Posted by West Coast Book Reviews at 17:02